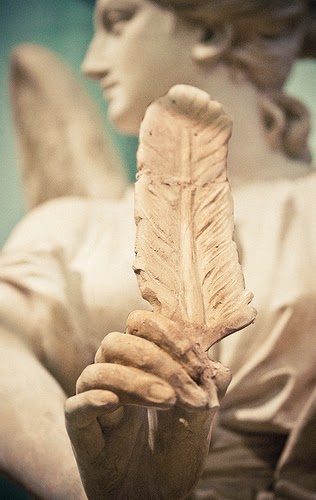 “I wish all of those bloggers would stop writing about Ferguson and actually start doing something to make a difference.”

I’ve heard complaints about bloggers before. But this one made my skin crawl.

For whatever reason, some find it annoying that the internet created a platform for average people. Sure, there’s lots of noise out there. But I celebrate the fact that publishers and periodicals are no longer necessary for ideas to be exchanged. I’ve found that some of the most impactful pieces come from those who don’t have a resume that includes formal publication. What could be more American than empowering the individual to have a voice in society?

But the idea that writing doesn’t constitute action is misguided, historically inaccurate and just plain wrong.

Sure, a solider could easily destroy most writers in a fist fight. Great speakers could energize a crowd more quickly than an author. But writers armed with ideas have sparked revolutions, established governments, captured hearts and changed the world.

Let’s not forget the influence of Homer’s Illiad and Odyssey. Imagine a church without Martin Luther’s 95 Theses. Then there’s that little pamphlet by Thomas Paine that fueled the flames of revolution in America. And our Constitution probably wouldn’t have been ratified without a series of essays known as The Federalist Papers. Or how about that brilliant letter scribbled on scraps of paper by Martin Luther King Jr. in a Birmingham jail. It motivated an entire nation to seek justice for the oppressed. And were it not for the inspired words of Moses, the Prophets and the Apostles, I might not be a follower of Jesus.

I could keep going, but you get the point.

So bloggers, keep writing. I need your commentaries and thoughts to better understand the cultural tensions behind Ferguson. Your words enable me to leave my circle of friends and learn from diverse perspectives. And your efforts propel all of us toward a better society.