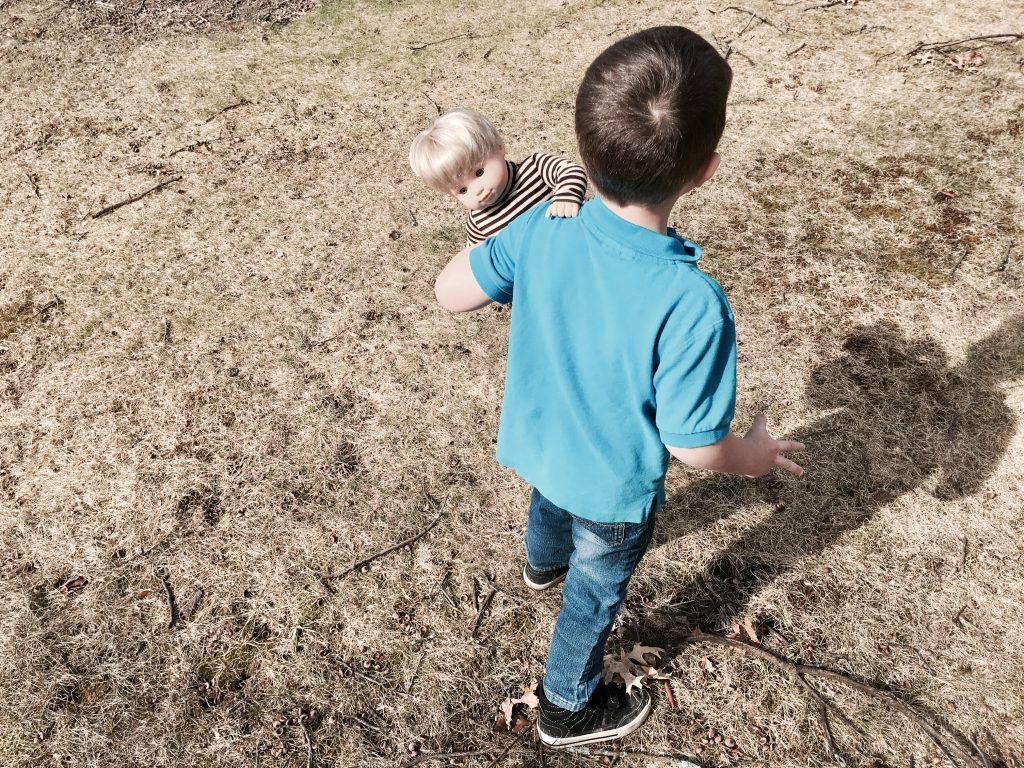 He called it a “trick of the enemy” that will “emasculate little boys” and “confuse their role to become men.” What terrible phenomenon motivated a North Carolina pastor to write these words to the Washington Post?

After decades of requests from fans, American Girl released their first-ever boy doll last week. This historic moment for the wildly popular company made headlines across the country. But as many celebrated the milestone, some Christians expressed deep concern.

Gratefully, we’ve got nothing to worry about. Here are 5 reasons Logan’s existence should be no big deal for followers of Jesus.

Dads push strollers. We also change diapers, sing to babies, snuggle with sleeping infants, and carry diaper bags. We kiss our sons and tell them we love them. These behaviors aren’t feminine or sinful. They’re the actions of strong men who love Jesus and their families with genuine, sacrificial affection. We shouldn’t fear our sons doing the same things with boy dolls. In fact, why not celebrate that our sons seek to emulate the behavior of their fathers?

This isn’t a new phenomenon.

American society is steeply veering away from God’s design for sex and gender. But let’s not allow that reality to blind us from what’s been happening for decades. In the 1970’s, little boys played with “Dapper Dan” dolls. In the 1980’s, there was “My Buddy” and “Cabbage Patch Kids.” This isn’t a new tactic covertly designed to turn little boys gay. It’s just another toy.

Obviously, Christian parents would have good reason to object to a gay or transgendered doll marketed to little boys. But that’s not the case with this one. Logan Everette is a drummer. He’s wearing a t-shirt that says “Play Loud,” along with jeans and a button down shirt. There doesn’t appear to be anything gender-neutral about him. Why the concern?

Christian men show affection for one another.

I’ve been married for over 13 years, and have five kids. I’ve also got some close guy friends that I hug every time I see them. And I tell them I love them when we say goodbye. This isn’t weird or sinful. It’s a reflection of deep Biblical friendship. Look at David and Jonathan. When describing their friendship, the Bible says, “…the soul of Jonathan was knit to the soul of David, and Jonathan loved him as his own soul.” Once when they parted, the Scriptures describe an emotional goodbye where “…they kissed each other and wept together.” Then there’s John’s description of his friendship with Jesus illustrated during the Last Supper. He wrote, “There was reclining on Jesus’ bosom one of His disciples, whom Jesus loved.” Paul told the Roman church to “Greet one another with a holy kiss.” Clearly, men showing affection for one another doesn’t automatically imply homosexuality. It can be a healthy expression of Godly friendship. As I’ve written before, we cannot allow ourselves to create an incomplete and inaccurate picture of Biblical manhood. With that in mind, this doll is harmless for little boys.

I haven’t heard Christians object to a shirtless He-Man, or his tight shorts and bulging muscles. Nobody seems to be bothered by Spiderman’s androgynous spandex costume, or Captain America’s form-fitting suit. I also haven’t heard anyone express concern that little girls might become lesbians after playing with Barbie. Nobody is calling for an end to play dates between little boys. So what’s the big deal about a boy doll that plays drums? Let’s be sure we’re both consistent and logical in what we expect for our kids. Failing to do so will compromise both our credibility and our witness.

There are definitely times Christians need to reject trends in secular culture. This isn’t one of those times. We’ve got much bigger issues to worry about than a male doll named Logan that plays the drums. But at the end of the day, there’s a simple solution for those who object to this new toy: Don’t buy it.

One thought on “Should Christian Boys Play with Dolls?”