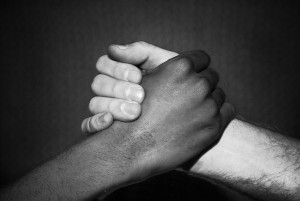 We kept waiting for it to happen. When would they notice? What would they say? How should we respond?

We’d been regularly attending an African American church on the South Side of Chicago for a number of months. Our kids were about 2, 3 and 4 years old. Surely they’d notice that we’re basically the only white people in the building. My wife and I did our best to prepare for the “right” response.

But as the weeks passed, they didn’t say anything.

On Easter Sunday, we were standing in the crowded narthex just outside of the sanctuary. All of the other parents were waiting along with us to head in for the children’s Easter program. My oldest daughter was proudly wearing her favorite purple dress, and was practicing her lines.

Then she said it. Loudly. In front of everyone.

“Daddy – you’ll be able to find me REALLY easily when I’m on the stage.”

I froze. My mind started racing. What would I say when she loudly proclaims in front of everyone that all of the other kids are black? Would she say something that would innocently sound racist? What would the other parents think of me? I was basically panicking, while pretending to be calm.

I quietly responded, “That’s great! How will I find you?”

She said, “I’m the one in the purple dress!”

Clearly, that wasn’t the response I was expecting. I was so taken by surprise that I laughed out loud! Even after all those months, she hadn’t noticed that her skin was lighter than everyone else’s. Or it just didn’t matter to her.

Either way, I walked away a changed man.

So much from American history and culture contributed to my hypersensitivity about race at that time. I think it’s safe to say that most people in this country today harbor similar levels of hypersensitivity. And it’s a tragedy that must be courageously confronted. Particularly in the church.

Followers of Jesus in America need to strive for what my daughter and her friends represented that day. Diversity in the church is beautiful and important. But it should be comfortable and normative, rather than the source of hypersensitivity. And church should be a place where unity as brothers and sisters in Christ supersedes everything else.

3 thoughts on “The Only White Kid”