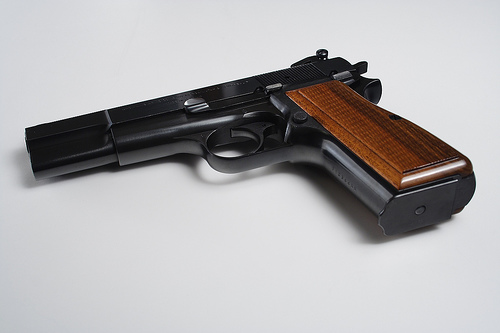 It’s the mantra of many Christians in the face of highly publicized gun violence in America – “More guns!” Liberty University President Jerry Falwell Jr. highlighted this reality when he called all of his students, faculty and staff to arm themselves.

The Second Amendment is simple and direct. In fact, the very existence of this nation is founded upon the value of average citizens arming themselves in revolt against a tyrannical government. Without an armed citizenry, the American Revolution wouldn’t have happened. But under what circumstances would it be wise for Christians to publicly promote exercising this fundamental American right?

I’m a guy that values critical thinking. This requires me to ask hard questions, and hold loosely to preconceived notions. If you’re willing to join me in that exercise regarding guns, keep reading.

Full disclosure: I’m not a pacifist or a peace monger. My wife and I own both a handgun and a shotgun. I’m also not a theologian, and I don’t claim to have all the answers. But I believe God’s Word is accessible to all, and advanced degrees aren’t required for thoughtful discourse.

With all of that said, let’s dive in.

Then Jesus asked them, “When I sent you without purse, bag or sandals, did you lack anything?”

He said to them, “But now if you have a purse, take it, and also a bag; and if you don’t have a sword, sell your cloak and buy one. It is written: ‘And he was numbered with the transgressors’; and I tell you that this must be fulfilled in me. Yes, what is written about me is reaching its fulfillment.”

At best, an unfiltered examination of these concepts should create tension in the mind of followers of Jesus. I don’t see room for easy answers about Christians and guns. Instead, it makes more sense to lean heavily on what we know to be true. If God clearly gives government the authority to enact justice on earth (See Romans 13), shouldn’t we more logically publicly advocate for the expansion of their ability to protect us?

I don’t see anything wrong with gun ownership. The Bible seems to indicate it’s permissible. That’s why I’m comfortable owning two myself. But perhaps our advocacy of it should be much quieter. Or even unspoken. And our call for government to better exercise their Biblical authority should be much louder.

In the end, I don’t want people to know me for my position on the Second Amendment, or for advocating Christians shooting people. I want them to know me for loving Jesus, loving my neighbor and loving my enemy.