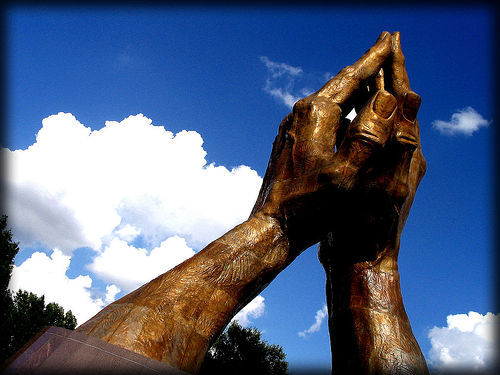 They were overly harsh, and a little insensitive. But don’t be too quick to dismiss their criticism.

It’s become the obligatory gesture following any tragedy. As soon as the news breaks, everyone on Facebook and Twitter send their “thoughts and prayers” to anyone impacted by whatever happened. It’s become so cliche, that significant push back finally bubbled to the surface after yesterday’s mass shooting in San Bernardino.

But can followers of Jesus look past the harsh tone and insensitivity of those mocking our prayers, and dare to ask a hard question: What if they’re right?

As I process this in my own mind, here’s a few thoughts worth considering:

What good is it, dear brothers and sisters, if you say you have faith but don’t show it by your actions? Can that kind of faith save anyone? Suppose you see a brother or sister who has no food or clothing, and you say, “Good-bye and have a good day; stay warm and eat well”—but then you don’t give that person any food or clothing. What good does that do? So you see, faith by itself isn’t enough. Unless it produces good deeds, it is dead and useless. (James 2:14-17)

Harsh words hurt. Critiques are hard to swallow. But we’d be wise to take our public perception seriously. A healthy dose of humility might allow us to see past heated emotions and unfair critiques, and enable us to learn something about ourselves. In so doing, maybe we’d even draw skeptics closer to Jesus.

4 thoughts on “‘Thoughts and Prayers’ Critics May Have a Point”