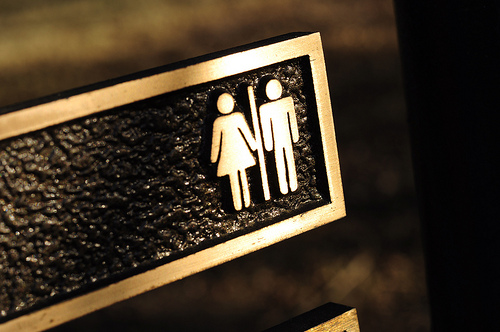 Whether you like it or not, society is changing. Quickly.

Recent actions by the Obama administration place schools and parents in a difficult position. In an effort to protect transgendered kids, federal funding will now be tied to allowing them to use the restroom and locker room that corresponds to their gender identity. Add to that the ongoing American Family Association boycott of Target stores over their transgender bathroom policy.

How should Christians respond? Here’s 11 thoughts to consider:

It’s gloriously simple, yet so easy to forget: We’re wretched sinners. We’re only saved because Jesus paid the penalty for our past, present and future sins. Transgendered people are in desperate need of forgiveness through Christ, just like us. Let’s exercise the humility that comes from the knowledge of sin, and embrace our primary responsibilities of loving God, loving our neighbors and making disciples.

Don’t embarrass yourself, or the rest of us on social media.

I get it. You’re scared, frustrated and angry. You can’t believe that the America you grew up in looks like this. You should definitely talk to someone about it. Call your best friend. Talk to your spouse. Head over to your small group leader’s house. But please, remember that social media is a public forum. If you love Jesus, be sure to exude love, joy, peace, patience, kindness, goodness, faithfulness, gentleness and self-control (See Galatians 5:22-23). Remember that Jesus said peacemakers are blessed. Paul admonished us to live at peace with everyone, as far as it depends on us. When people look at your Facebook posts, I hope they can see Jesus.

Outrage is a futile response.

In a recent blog post, author Stephen Altrogge raised some thought provoking ideas about Christians and outrage. Without a doubt, it feels good. It may even seem justified. But it’s both futile and unhelpful in situations like this. Why? People who don’t know God won’t listen to us (1 John 4:5-6). And outrage never leads to righteousness (James 1:20). So let’s get productive and move beyond outrage.

Your child’s teacher didn’t do this. Neither did their principal, or the customer service representative at Target.

If the food is terrible at a restaurant, it’s not the server’s fault. But lots of people yell at them anyway. Resist the temptation to call your kid’s school and holler at someone. They didn’t create this policy. In fact, they probably heard about it the same way you did. Don’t make life harder for them by sending angry emails, or leaving irate voicemails. Give them some space, and ask respectful questions. But don’t blame them for a situation they didn’t create.

I recently spoke to a Christian guy who works at Target. He’s not happy about his employer’s statement, but needs the job to support his family. With sadness in his voice, he talked about a Christian woman who came into the store, and screamed at someone in customer service about their bathroom policy. Another shopper loudly declared, “If someone of the other gender comes into the bathroom while I’m in there, I’ll shoot them.”

People at your local Target store just work there. They don’t create company bathroom policies. Leave them alone. If you want to voice your concerns, call or write the corporate office.

Have you taken time to actually read the letter from the Education and Justice departments? Most have only read articles and summaries. Are you sure you can trust those interpretations? I’ve seen some imply that teenage boys can now declare a different gender identity on a whim, and burst into the girl’s locker room to see their peers naked. That’s probably not true. The letter indicates that school administration should be notified about a gender identity change:

If we’re lovers of truth, let’s not rely on our favorite pundits or commentators to interpret it for us. Let’s seek it ourselves (If you want to read the short letter for yourself, click here).

Be like Paul: Get creative and exercise your rights.

The Apostle Paul set a great example for us when he was oppressed. If you haven’t done so recently, take time to read through the book of Acts, chapters 22-28. Paul boldly claims and exercises his rights as a Roman citizen. If you’re upset about the various new bathroom policies, you can do something about it. We have wide ranging freedoms including speech, assembly and press. Exercise them. As blogger and radio host Julie Roys recently pointed out, the Administration’s letter may not even be enforceable.

But don’t just focus on what you don’t like. Let’s embrace our God given creativity, and work toward a viable alternative solution. Transgendered kids deserve protection and freedom in school, and all students have a right to privacy. What if Christians led the charge toward a viable solution that works for everyone?

This is a tough pill for many to swallow. Particularly those who are passionate about politics. But the Bible is pretty clear. Solomon said, “Never make light of the king, even in your thoughts. And don’t make fun of the powerful, even in your own bedroom.” Romans 13 and 1 Peter 2 both remind us to honor and respect government authority. When called before the Jewish high council that wanted to kill him, Paul referred to them as “brothers.” He spoke to Governor Felix, Governor Festus and King Agrippa with gentleness and respect (See Acts 24 and 25).

You don’t have to like what the government does. You don’t have to be quiet about it either. But there are ways to do so that reflect the character of Jesus and respect those He placed in positions of authority.

I love using wildly exaggerated examples to prove a point. I probably do it too often. So let’s be guided by reasonable thinking and factual information. Bathrooms in schools and stores won’t instantly become violent places devoid of privacy. Boys and girls won’t be showering together tomorrow after gym class. In fact, students haven’t been showering at school for decades. Also, transgendered people likely represent about 0.3% of the U.S. population, so most kids won’t have to face this problem. It’s certainly an issue that needs to be addressed, and voices of concerned parents need to be heard. But there’s no need to panic.

Gratefully, it’s been illegal to physically and sexually assault people in the United States for a really long time. Those laws aren’t voided in bathrooms and locker rooms. It’s also illegal to secretly take pictures of people when they’re changing or going to the bathroom. If something terrible were to take place, the perpetrators will be apprehended and punished. And they should be.

Your kids can be wise…if you teach them.

Adults often underestimate the intelligence of kids. If parents spend a few minutes talking to their kids about this, I’m sure we can give them ideas as to how to handle difficult situations. For example, kids sit out of gym class every day because they refuse to change clothes, or forget to bring them. Or, if they encounter an uncomfortable situation, they can walk away and get help. Lets empower them with wisdom and critical thinking, rather than scare them about something that may or may not happen.

Most of us still have a choice.

Free public education is a wonderful thing. Federal funding is also an incredible resource. But we always have a choice. We can choose to put our kids in private schools, or teach them at home. We can establish scholarship funds for those who cannot afford private school. We can find investors to launch new Christian schools across the country. While I don’t think Christians should abandon public schools, nobody is forcing us to attend them either.

The world is watching us. Our ideas, words and actions will be attributed to Jesus because we are His ambassadors. This is both an enormous responsibility, and a wonderful opportunity. May God grant us the wisdom and patience to represent Him well, and guide the lost to salvation through Jesus.

6 thoughts on “Bathrooms, Locker Rooms and Christians: 11 Thoughts to Consider”